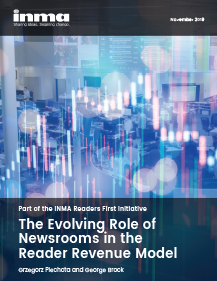 The Evolving Role of Newsrooms in the Reader Revenue Model

Journalism and its relationship to digital subscriptions are quickly replacing advertising as the key revenue drivers of news media companies worldwide. The report, part of INMA’s Readers First Initiative, looks at the essential functions of a readers-first newsroom, why trust is key in reader revenue, what readers will pay for, and how news media leadership can guide this transition.

Six key newsrooms transitions are covered in the report

Who should read the report?

Grzegorz “Greg” Piechota is an academic researcher, digital transformation consultant, and writer. As a researcher-in-residence at INMA and an ex-fellow at Oxford and Harvard universities, he has studied technology-enabled disruption patterns across industries with a focus on business model innovation in news media. Greg is a former media executive with 20+ years of industry experience, beginning at Poland’s Gazeta Wyborcza in 1996 where he worked his way up from local reporter to news editor and vice president of Agora Foundation. Piechota leads the INMA Readers First Initiative.

George Brock is a journalist, consultant, and visiting professor at City, University of London, where he directed the journalism school from 2009 to 2014. Currently, he consults for newsrooms, start-ups, and research projects. He began his reporting career at the Yorkshire Evening Press and The Observer. In 1981, he joined The Times, where he served as a feature writer, features editor, op-ed page editor, foreign editor, Brussels bureau chief, European editor, managing editor, and Saturday editor.

About the Readers First Initiative

The INMA Readers First Initiative aims to surface global best practices in the art and science behind digital subscriptions for news media companies and create a road map toward the next generation of consumer monetisation. The initiative produces newsletters, Slack channel interactions, video meet-ups, reports, Webinars, and workshops for INMA members worldwide.

The report delves into nine findings and conclusions:

The report offers a framework to understanding the changing roles of newsrooms as they relate to reader revenue, as well as a look into what this successful transition entails.