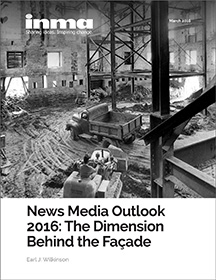 News Media Outlook 2016: The Dimension Behind the Façade

After seven years of adding new functionality to fast-transitioning media companies, the year ahead will be focused on back-filling and optimising those competencies, according to “News Media Outlook 2016: The Dimension Behind the Façade.”

* Free to INMA members whose memberships were active on March 14, 2016

The 15th Annual News Media Outlook report provides a snapshot of a media industry still in transition yet needing to optimise the many new initiatives that now make up multi-platform companies.

“News Media Outlook 2016: The Dimension Behind the Façade” is written by INMA Executive Director and CEO Earl J. Wilkinson. This year's report marks the 15th annual report card on the global news media industry based on feedback from INMA members and Wilkinson's travels worldwide.

The Outlook report provides news media executives worldwide with strategic guidance and perspective in fast-changing times and is considered a “must read” by senior managements.

The 105-page report is free to INMA members and available for purchase by non-members.

Key themes in the report include:

“The report's name — 'The Dimension Behind the Façade' — is a metaphor found in recent history,” Wilkinson said. “It has occurred to more than one CEO I've visited in the past year that propping up the façade and reconstructing is taking longer and costing more money than starting over might have yielded. It is provocative and — like the report — designed to make news media executives really think through their value proposition and their road map.”