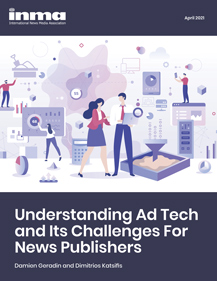 Understanding Ad Tech and Its Challenges For News Publishers

Decoding the complex ad tech ecosystem, this report aims to educate publishers on the mechanics behind online display advertising, examine the surge in regulatory action that may re-set the table for ad tech, and discuss the interplay between privacy and competition.

Who should read the report

Damien Geradin and Dimitrios Katsifis are the founding partner and senior associate, respectively, at Brussels-based Geradin Partners. They are focused on the application of competition law in the tech, telecoms, and media sectors, and their work has been cited by competition authorities in the United States, United Kingdom, and Australia.

“Understanding Ad Tech and Its Challenges For News Publishers” ties together the back story of advertising technology to today’s regulatory and legislative focus on the ad tech ecosystem. The report synthesises the investigations, legislative initiatives, privacy aspects, and challenges ahead for publishers and ad tech.

Part of INMA’s Digital Platform Initiative, the report paints a picture of an ad tech landscape in flux, in large part because of investigations and regulatory actions in the United States, United Kingdom, European Union, and Australia. The inquiries focus on the ad tech supply chain, concerns about conflicts of interest and self-preferencing, data advantages, opacity over ad tech fees, and the need for remedies.

The broader ad tech ecosystem, meanwhile, lacks transparency after more than two decades of unregulated development, the report points out. For example, the middlemen between advertisers and publishers in the indirect programmatic marketplace take between 28% and 35% of an advertiser’s spend, according to conservative estimates.

The report distills and document from publicly available material what is happening internationally and zoom in on the most salient aspects for news publishers.