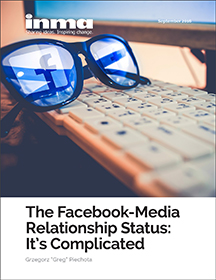 The Facebook-Media Relationship Status: It's Complicated

At the intersection of Facebook and news media sits a complex and intertwined relationship. In this report, INMA analyses Facebook and its related platforms and puts them in the broader context of how consumers use social media. The report explains how Facebook’s algorithms work, surveys publishers about their relationship with Facebook, and explores strategies to use Facebook to engage readers and generate advertising revenue.

Grzegorz “Greg” Piechota is a research associate at Harvard Business School in the United States who is studying technology-enabled disruption patterns across industries, including news media. A 2016 Nieman Fellow at Harvard University, Piechota explored the transformation of the media business and the future of work in creative industries.

In addition, Piechota serves as a digital strategy adviser at Poland's Gazeta Wyborcza (Agora) and consults with media companies worldwide. He is a member of the INMA Board of Directors and is a past president of INMA’s Europe Division.

“The Facebook-Media Relationship Status: It’s Complicated” aims to provide an executive-level overview of how the social media giant intersects with news publishers as of late 2016.

In this report, INMA:


Author Grzegorz “Greg” Piechota brilliantly fuses the world of news media and academia to suggest a thoughtful partnership between Facebook and news media companies – a relationship that should be based on transparency and mutual support.

“No subject today occupies the minds of news media executives like the relationship with Facebook, the primary driver of digital traffic for publishers worldwide,” said Earl J. Wilkinson, executive director and CEO of INMA. “This new report thoughtfully explores the totality of the relationship, serving as an executive overview and a strategy blueprint.”