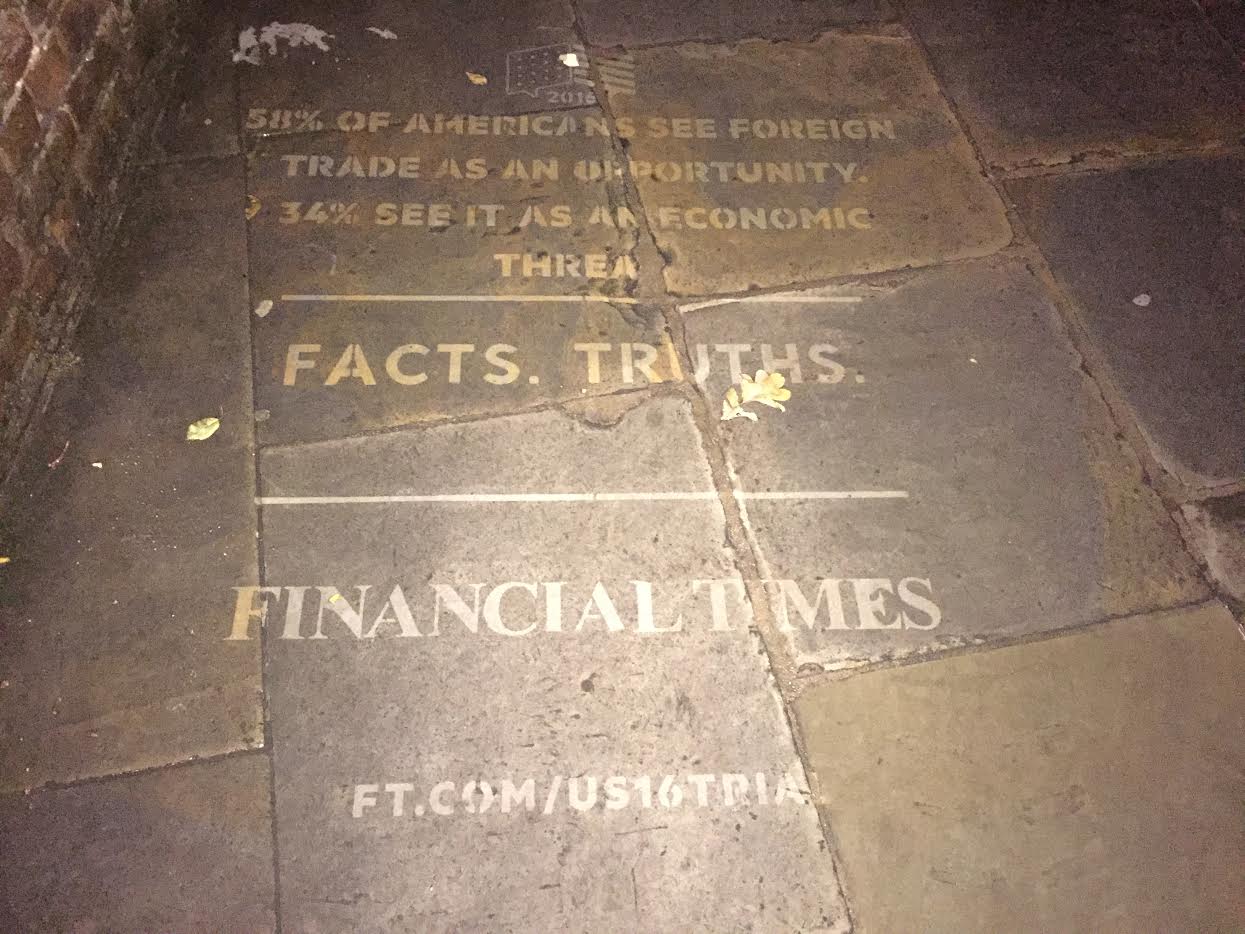 -Position FT as the global authority on economic and political news

For this campaign, we focused on the US to expand our reach in this important, growing region. The media industry in the US is in a particularly contentious position, and we wanted to emphasize the FT’s position as a global, non-partisan source of news on the US and politics, in additional to our international coverage -- and valuable in this regard to both US and global readers. Our target audience included current readers, potential subscribers, and advertisers around the world.

Preparation was key: we collaborated with multiple departments from the start – including, crucially, editorial – putting put our world-class journalism at the heart of our strategy. Working with our journalists and our in-house design team, we designed a series of advertisements with the endline “Facts. Truths.” It used statistics and insight about issues such as household income, immigration, trade and manufacturing to set the FT in opposition to post-truth politics. We designed additional creative for either outcome of the election.

We placed ads on FT.com, in the newspaper, and on FT social media. We also placed ads on external sites, and digital out-of-home activity in high traffic areas around London. Much of this was payed for by contra, contributing revenue to FT’s bottom line. The campaign ran in outlets including The New Yorker, Esquire, Flipboard, and in a variety of out-of-door locations, including almost 300 retailers, newsagents, coffee shops, airports and commuter rail stations in the UK and 25 US markets including NYC, Chicago, Boston and LA.

We also implemented a street graffiti campaign in London, Washington and New York’, which, paired with street activation teams, added an experiential element.

The reverse graffiti campaign, in addition to strengthening our brand presence in key cities, provided the basis for B2C and B2B teams to promote subscription messaging via merchandisers and leaflets (40,000 delivered in total).

We also promoted FT as an unbiased source for election news through 65 broadcast interviews, including Editor Lionel Barber on PBS Charlie Rose Show and US Editor Gillian Tett on PBS Newshour, reaching over 25million viewers.

2016 was a year of unexpected news that changed the global world order. Because our integrated communications and brand campaigns were editorially driven, we could fully capitalise on these events. Our work was always timely and relevant, complementing the news product it was promoting. With a relatively small budget, we accomplished our goals of reaching both new and existing customers, and positioning the FT is an essential read.

The Times & The Sunday Times