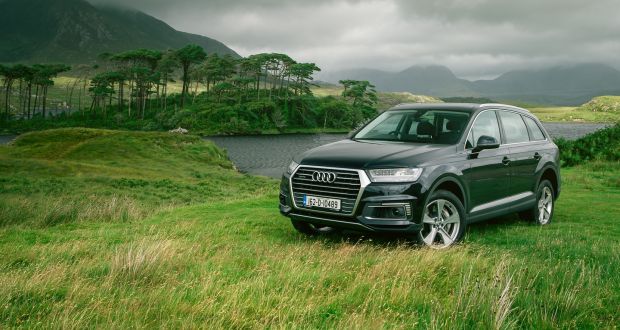 The Irish Times Content Studio was appointed, by Mediacom Ireland, to deliver upon these objectives.  The response was a campaign entitled 'The Best of Both Worlds', and the design response to this brief was incredibly visual: a series that took the Audi Q7 to unusual and beautiful places taking in mountains, land and sea, using stunning visual techniques, interesting Irish people, supported through targeted print, digital, video and social.  Driven to succeed, we focused on two Irish people making the best of both worlds, while also profiling Audi’s new Q7 E-tron and the role it plays in their lives.

The Q7 was deliberately low-profile in the videos, focusing on the people behind the wheel.  Strategically, this was to peak the curiosity of the viewer, encouraging dwell time and higher engagement, which certainly paid off.   For maximum effect, the very latest technology here was applied, including a handheld “steady cam” delivered superb quality action footage in the most demanding of conditions, while a drone was utilized to capture spectacular panoramic sequences. Featuring that a few years ago would have been impossible without the use of wildly expensive helicopters.  Dozens of hours of video were taken to the editing suite where the process of distilling that vast amount of content into three minute videos took place. An achievement in keeping with the extraordinary people featured.

The content performed exceptionally well, delivering a combined 38,173 article views on IrishTimes.com with dwell times of 3min 11sec and 2min 32sec, equating to 1,910 hours of article consumption time. Across social media the posts reached in excess of 460,000 Individuals and received 1,119 high quality engagements (likes, comments, re-tweets, shares, favorites). The videos achieved a combined total of 153,000 views across the website and through social media.

To measuring the ad effectiveness both pre and post campaign, research was conducted with our reader panel, collecting 2,182 responses.  Comparing the sample of readers exposed to the campaign with our total audience:

Of the exposed group

"One of the challenges we faced was communicating the product truth behind our Quattro technology.  We challenged MediaCom to find an innovative media solution that would help us to deliver an immersive launch campaign, while ensuring maximum return for our media investment. The Irish Times was selected as a media partner not only on the demographic fit on the publication, but the team at The Irish Times worked with us very collaboratively on how best to communicate Quattro technology through our print, editorial, display, online content and native ads."

The Dream Of Trango