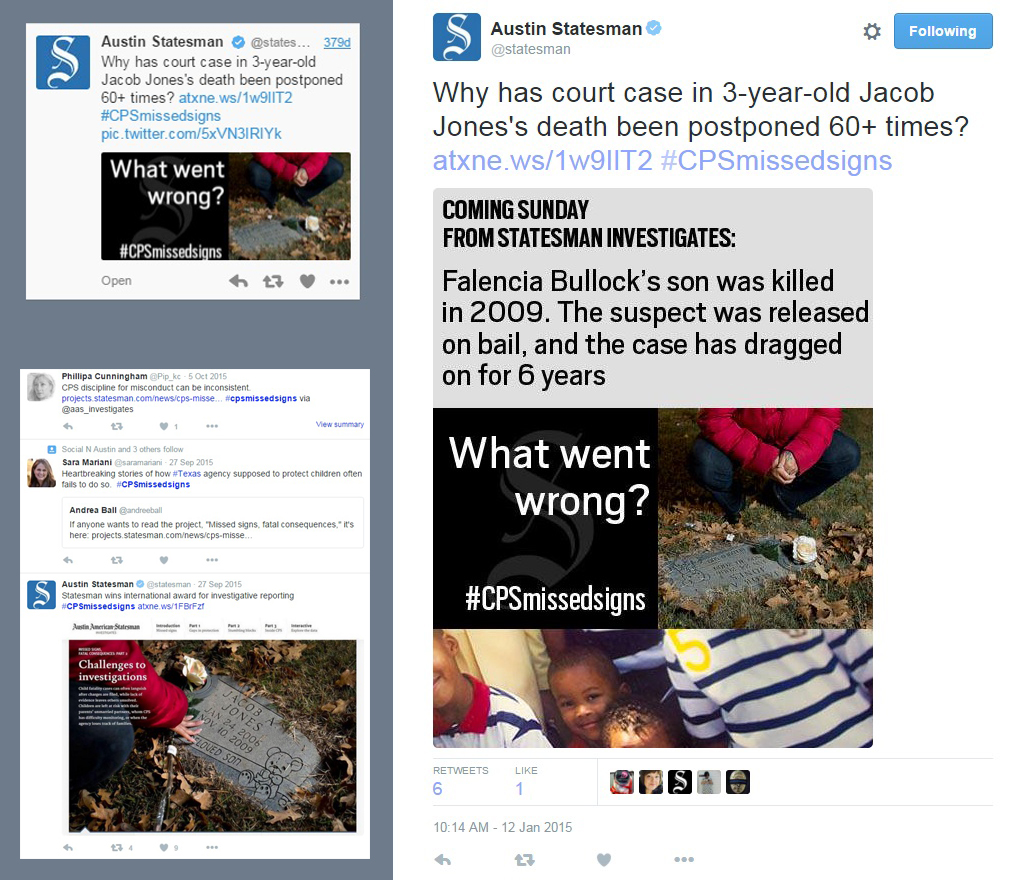 The Austin American-Statesman has a strong and vocal readership on social media, where our flagship brand has more than 175,000 followers on Twitter and more than 140,000 followers on Facebook. Our analytics show us time and again that what our audience wants to see and click on via social media is predominantly crime news and proven viral content, rather than our most in-depth investigative pieces. In an effort to combat this, we created a comprehensive social media campaign around a 6-month investigation into CPS in Texas titled "Missed Signs, Fatal Consequences." We set out to show that through careful planning, strategic teasing ahead of time, optimized images and buy-in throughout the newsroom that we could have a major impact on the social media traffic to our biggest investigation of 2015. We began preview promotions from our branded accounts and from individual reporters the week before publication, and launched the hashtag #CPSmissedsigns to start the association early. Our web developers built into the story presentation buttons that would allow readers to tweet pre-formed tweets that included some of the most shocking facts from each story of our multi-part series. We also embedded Facebook posts promoting the story within the story, to encourage readers to comment on Facebook and continue spreading the story. We built social sharing images optimized for twitter that would show a central section in the twitter feed, and then expand when clicked on to give readers a more engaging photo to draw them in. On launch day, we asked everyone in our newsroom to help spread the message on social media by sharing our original Facebook post from their personal Facebook accounts to help our story rise quickly within the Facebook algorithm. As the full package rolled out, and follow-up stories were written, we continued to push and promote our #CPSmissedsigns hashtag.

We launched the story in January 2015. In what was an otherwise slow month for the Statesman on social media - only 17 percent of our site traffic that month came through social media - 48 percent of traffic to the #CPSMissedSigns project was driven by social media. Social traffic to some high-traffic individual pieces of the multi-story package rose as high as 73 percent – visitors who otherwise likely would not have visited the project. The hashtag that we created for our campaign picked up steam, trending locally on launch day. It was so successful that it was still being associated with the story in tweets by readers 9 months after publication. Our planning and presentation around the #CPSMissedSigns project became a template for promoting other social media projects throughout the year, from early teasing of the project and optimized images, to encouraging our entire newsroom to buy-in and help us virally spread our story to readers who otherwise might not have found that content.