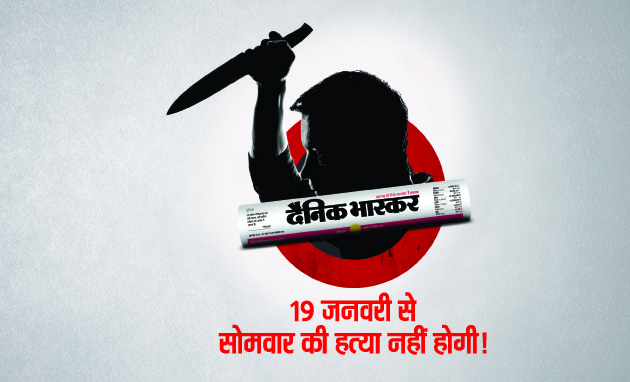 To trigger positive emotions amongst the readers and society at large thereby spreading positivity and enhancing their confidence to succeed.
A common grouse against Indian media is that nowadays, the news channels and newspapers are full of negative news like crime, corruption, scams etc which makes the readers feel that all that is happening in the society is negative. Every morning we wake up to news of horrifying murders, rapes, abductions, scams and corruption splashed across the newspaper and think- “What a horrible start to the day? This must end.”The reader thus starts his day on a negative note and at times with a depressed feeling. This is quite in contrast to general wave of optimism sweeping the country.
Taking cue from this dissatisfaction about negative news and realizing its responsibility as a credible newspaper, Dainik Bhaskar, India’s largest circulated daily, has pioneered change that has never been witnessed in the history of media anywhere in the world- ‘No Negative Monday’. Keeping in mind the fact that readers like to start their week on positive note, Dainik Bhaskar has initiated and driven this movement on Monday, since it is the first day of the week and people generally plan for their whole week on this day.

• Trendsetting, first of its kind, initiative undertaken by an Indian media house.
• Published Print ads and Topical ads were instrumental in reaching out to readers.
• TVC was created to amplify the overall reach.
• Outdoor innovations were done in malls and traffic signals to create a cascading effect.
• Website was created in integration with ‘No Negative Life’.
Through this initiative, the positive news was delivered across its pages through the following:

Positivity in Negative News: Instead of presenting the negative news as it is, efforts are made to find out positivity in negative news across different sections and present the same to readers in positive manner.
Stories of Hope: Dainik Bhaskar tries to bring out positive Stories of Hope thereby mirroring the positive India upsurge which will sustainably deliver happiness every day, as a by-product of positivity.
Negative Stories with clear header: As a responsible newspaper, Dainik Bhaskar did not deprive our 44 million readers from the negative things happening in the society but instead, in case of the issue being relevant, critical and negative, it has been published prominently under a clear header saying it was necessary for its readers to know this news under separate headers of Negative News in all its 61 editions in 14 states on Monday.
Good News: To be really happy one need is a positive attitude and mindfulness and Good News can be a triggering factor for the same. Everyday Dainik Bhaskar curates all the good news with a clear header.

The impact of our initiative ‘No Negative Monday’ has been so tremendous that other media groups have also started similar initiatives on these lines. Initiated with an objective to spread positivity, we are happy that our initiative has been replicated. Dainik Bhaskar has thus given a new direction to journalism with this movement of ‘No Negative Monday’ thereby mirroring the positive India upsurge which is delivering happiness sustainably every day, as a by-product of positivity.

When a newspaper decided to become the nation’s teacher

A Newspaper 'Walks the Talk'