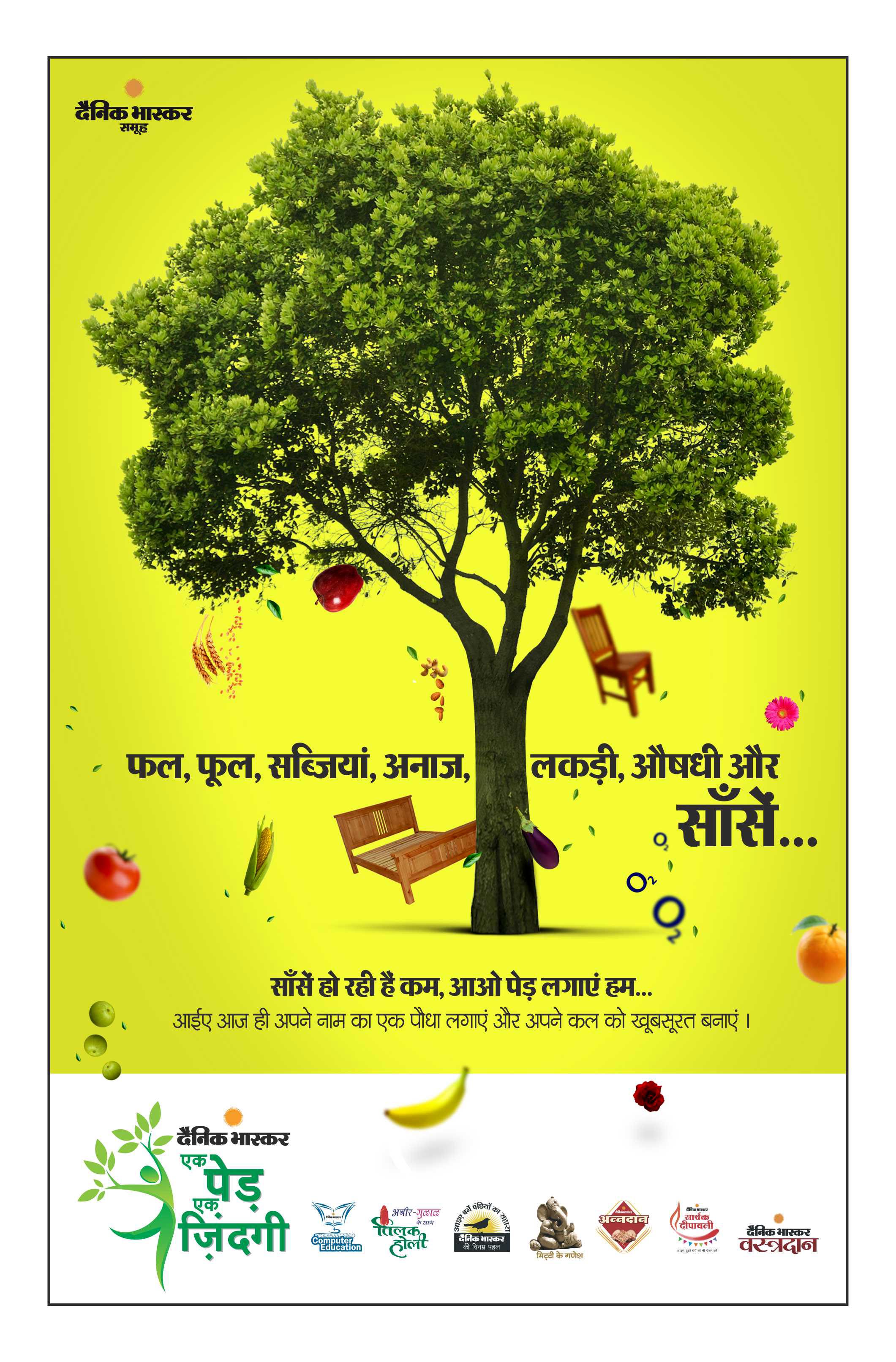 Dainik Bhaskar has undertaken ‘Ek Ped Ek Zindagi’(On Tree On Life) campaign across India with an aim to motivate people to plant at least one sapling in their name and nurture it till it becomes a fully grown tree. The initiative was implemented in 34 cities of ten states Madhya Pradesh, Chhattisgarh, Rajasthan, Jharkhand, Bihar, Chandigarh, Punjab, Haryana, Gujarat and Maharashtra. Under the aegis of this initiative, special emphasis is being given to planting native trees and medicinal plants.

Planting a tree is not just digging the soil and planting a sapling. The key lies in nurturing the planted saplings which, if done properly, will contribute immensely in increasing green cover and ensuring ecological balance.
India has 15 Agroclimatic zones and 17,000-18,000 species of flowering plants of which 6,000- 7,000 are estimated to have medicinal usage in folk and documented systems of medicine, like Ayurveda, Siddha, Unani and Homoeopathy. Some common medicinal plants are Kalmegh( Andrographis paniculata), Mithi Tulsi (Stevia spp), Brahmi (Bacopa monneire), Guar Patha (Aloe vera).Native Trees ,such as Kachnar(Bauhinia variegate), Amaltas(Cassia fistula), usually require less efforts to care for, provide more nutritious food for birds, supports greater diversity of insects (which in turn become food for birds) and generally allow for more diverse plant life as they don’t suppress other plant life by outcompeting them. At present, a wide range of medicinal plants and native trees are either threatened to extinction due to rapid deforestation, urbanization and lack of awareness about their importance.

• 2.5 million saplings were planted during the plantation drives.
• Plantation drives were undertaken in 411 Schools and 370 Police stations across 34 cities of 10 states in India.
• 65 kms of green stretch was created in 24 cities.
• 22km of graffiti wall was done in 22 cities.

Under the aegis of the initiative apart from driving it editorially, Dainik Bhaskar has also partnered with key stakeholders of the society including Govt. organizations(Ministry of Environment, Forest and Climate Change), schools, NGOs(Centre for Environment Education) and UNDP for on-ground implementation of the initiative to amplify its impact.

We, at Dainik Bhaskar, believe that driving behavioral change is integral to our efforts towards ensuring environmental sustainability. Nowadays, everyone is aware of the harmful effects of Deforestation and Global Warming, yet we tend to miss out the simple things which one can easily do to enrich the natural capital. Planting a tree with one’s own name has not only created an emotional connect with people but has also helped them nurture it as their own family member. Properly nurtured tree saplings not only contribute directly to the local environment, but also have a deep cascading effect of regeneration and propagation of the entire ecological processes. By simple act of planting and nurturing trees one never realizes its significance but is actually contributing to the herculean task of saving the planet.