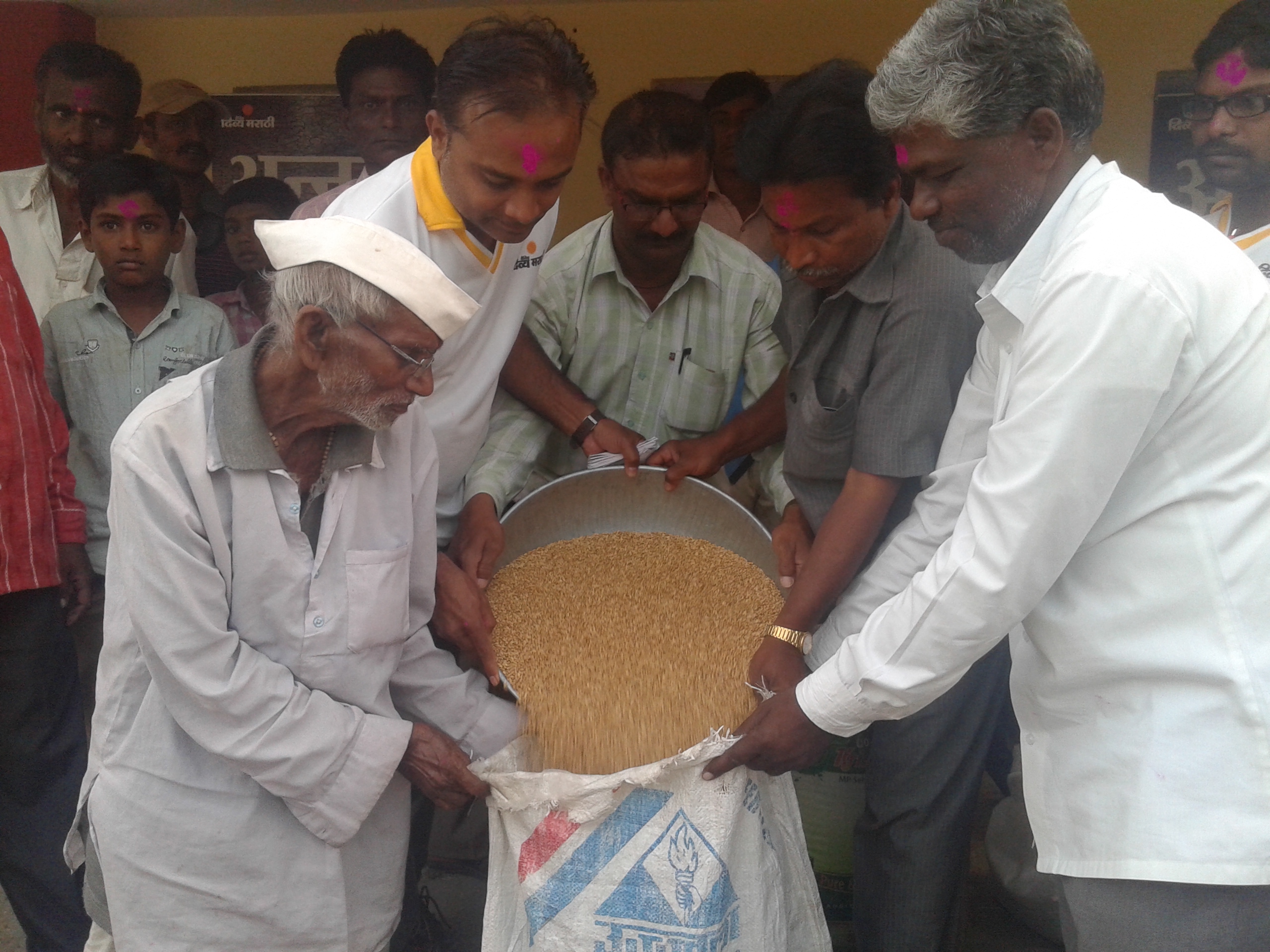 With an objective to extend help to drought affected farmers and their families, Dainik Bhaskar initiated ‘Annadaan’ (Food-grain donation) campaign across 36 cities in 10 states starting from 28th September-20th October 2015.
Through this initiative, an appeal was made to the citizens to contribute their bit by donating food-grains as a token of support towards the drought hit farmers. Dainik Bhaskar endeavored to utilize the power of ‘Annadaan’ towards this noble cause of providing food-grains to its growers who are deprived of food-grains because of the three consecutive devastating droughts. Interestingly, this initiative was aligned with the auspicious period of Pitrapaksha/Shradh during which people donate religiously not only to appease their ancestors but also exercise their individual social responsibility for the needy.
With farmer suicides already crossing the 600 mark, the Marathwada region of Maharashtra was reeling under the worst drought of recent years and has become a graveyard for the starving farmers and their families due to massive crop failure. As much as 84% of Maharashtra’s agriculture is rain-fed which includes Marathwada-the region which faces the worst ever drought in past half a century.The region normally receives around 780 millimetres of rainfall during monsoons. The number has dwindled to 259 this season. With incessant shortfall of rain in Maharashtra, water storage in the State’s dam has hit a three year low. Facing its third successive year of below normal monsoon, farmers and their families who feed billions are the ones who are bearing the brunt of unfailing droughts resulting in lack of consistent income necessary for their subsistence including proper food and water for them.

• Distributed 300 tonnes of food grains across 125 villages of the 5 most drought affected districts of Marathwada region.
• Benefitted 15,000 farmers and their families.
• More than 1, 50, 000 people participated.
• Distribution of food grains was flagged off by the Governor of Maharashtra Mr. C. Vidyasagar Rao.
Through this drive, Dainik Bhaskar Group has successfully collected 300 tons of food grains within a span of 20 days and further distributed it among 15,000 families through a cluster of distribution centers set up across 125 villages. Out of the 300 tons collected, 260 tons from 7 states were accumulated and transported to the drought hit villages of Aurangabad, Ahmadnagar, Jalna, Beed, Usmanabad and Latur districts for the purpose of distribution amongst the impoverished farmers thereby making ‘Diwali’ meaningful for them as in absence of which their families would have gone bed hungry. Rest of the 40 tons from 3 states was distributed locally to those in need.
Under the aegis of this initiative, concentrated efforts were made in close coordination with relevant stakeholders including local Panchayat Raj Institutions(PRI) members, NGOs and volunteers to distribute collect food-grains in packed packets of one, two, five, ten kilograms, amongst the drought-hit farmers and their families in the Marathwada region. Beneficiary cards and registers were also maintained to keep track of the food donations thereby removing any duplicity. The initiative was rolled out in 36 cities of ten states namely Madhya Pradesh, Chhattisgarh, Rajasthan, Jharkhand, Bihar, Chandigarh, Punjab, Haryana, Gujarat and Maharashtra.

The Guru of Retail Advertising