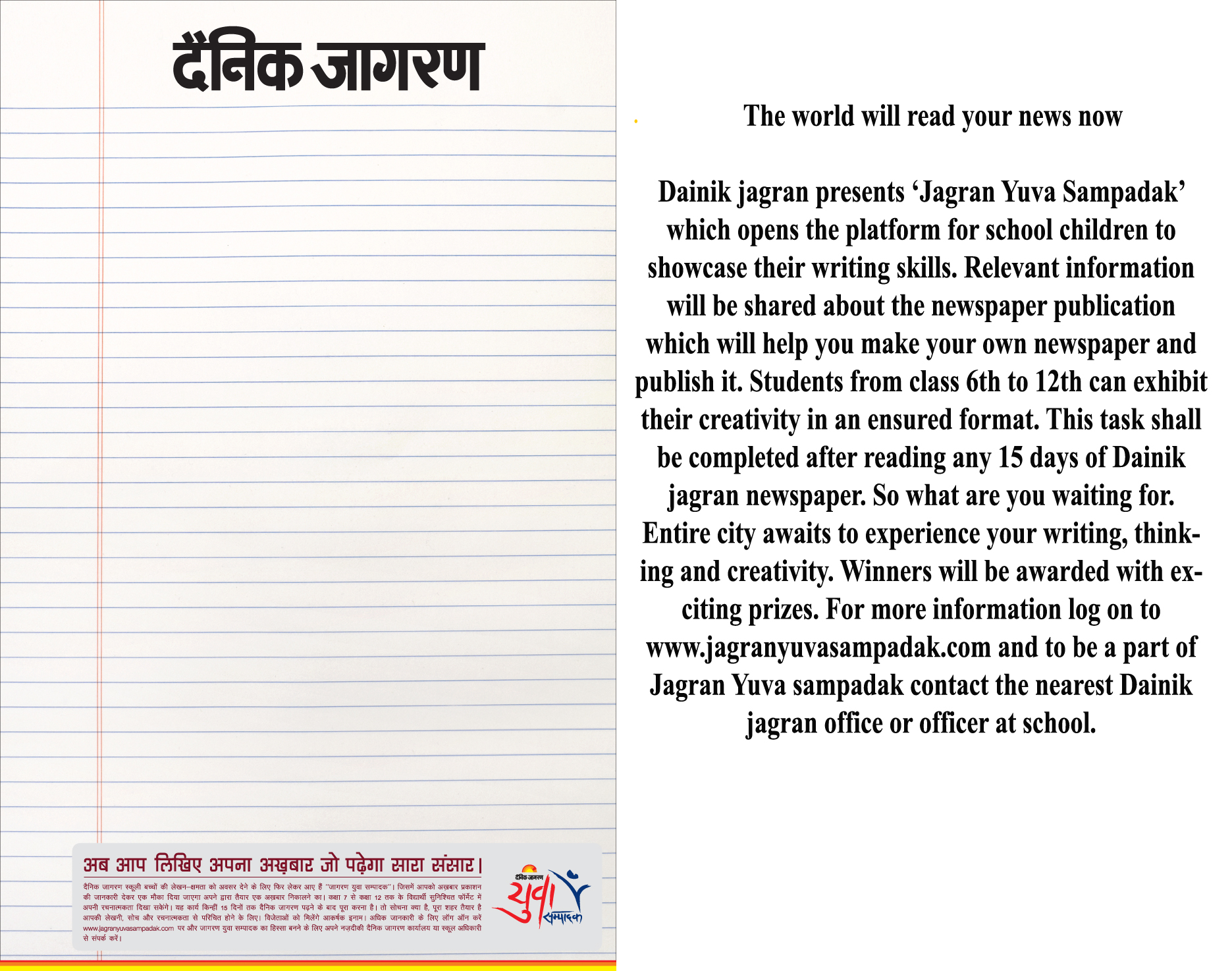 Creating a newspaper for the future, by the future

The new generation born in the midst of digital proliferation, consume news differently. They seek news rather than wait for it every morning. The challenge for the leader Dainik Jagran was to secure its future readers. Our goal was to start building future business today 1. To connect and engage with a large no. of new generation readers in order to gain relevance amongst them. 2. To increase readership amongst the current and future readers (12-19 yrs old)

Arriving at the idea An obvious way to appeal to the next generation was by creating a section for them featuring relevant news. But this wasn’t going to be enough. THE TWO PRONGED ISSUE Discussions with young readers directed us to two issues that pushed them away from newspapers – ‘irrelevance of content’ and ‘immobility of the medium’. Contrast this with Screens that were Relevant & Interactive WHAT HELD US BACK TOOK US FORWARD - ‘THE NEWSPAPER’

We addressed the issue of ‘relevance’ by asking them to interpret the newspaper as per their imagination and the issue of ‘interactivity’ by involving them in the process of newspaper creation. Thereby, changing our equation with them forever. The idea was to initiate the shift from “Not for me” to “For me & By me” This led us to the genesis of the initiative - YUVA SAMPADAK (Be the Young Editor) Dainik Jagran created a platform, to stimulate young readers to get involved, re-imagine and create the newspaper of tomorrow. Because we needed to learn what interests them, and what would get them to be with us in future. Bringing the idea to life An imperative of this idea was to move beyond the boundaries of the newspaper and engage young readers to define new boundaries. It was about building an ecosystem (comprising Schools, Journalists, & Young Readers) that would help us change our equation with them.

1. PARTNERING WITH CREATIVE INCUBATION CENTRES (THE SCHOOLS) –The school is a place where the environment is conducive for such an activity. It started with a blank full-page press ad in the form of a notebook page asking the young to come forward and create the newspaper of tomorrow. The activity was launched a week before the summer holidays and made it a part of their co-curricular activities during holidays.

2. EDUCATING YOUNG READERS - JOURNALISTS & WEB Students were educated about the process of newspaper creation. Workshops were conducted across 29 cities taking them through the newspaper creation journey. Special video and e-book tutorials describing each stage were made available on a website www.jagranyuvasampadak.com.

3. ASKING THE YOUNG TO CREATE THE NEWSPAPER - PHYSICAL & VIRTUAL The students were given an 8 page blank format newspaper to be created by them. They had to collect news, analyze and craft it in journalistic style. A separate facebook page was created for young readers to exchange ideas

4. RECOGNIZING THEIR TALENT & TURNING THEM INTO GUEST EDITORS The Top 3 young editors from each of the 27 cities after getting their submissions evaluated by top editors of Jagran, were given special newsroom training for a few weeks and were then asked to be guest editors for a special edition newspaper on 14th November – Children’s Day.

READERSHIP JUMPED AMONGST THE 12-19 YR OLD