SUMMARY: INMA leaders at the 83rd-Annual World Congress jumped right into the conference theme of “Monetizing the New Print + Digital Ecosystem,” setting the scene for the deep discussion on the agenda today and tomorrow.

The world is going digital, but Ravi Dhariwal, president of INMA and CEO of Bennett Coleman & Co. Ltd., asked the World Congress audience to keep print in mind as he welcomed them to this year’s conference. Dhariwal showed how more than half the world is seeing an increase in print circulation. He proposed the focus should be on both print and digital. Yasmin Namini, vice president of INMA and senior vice president/chief consumer officer of the New York Times, took the stage to encourage all in attendance to take advantage of their time at the Congress, to meet and learn from peers all over the world. Earl Wilkinson, executive director and CEO of INMA, stressed for in attendance to interact with INMA, to ask questions and to get involved.

“I would suggest to you that one of the keys to going faster is get out of the ‘do it yourself’ mode.” - Earl Wilkinson

“You ignore print at your own risk, so it’s very important to go back to basics and re-invent print as well.” - Juan Señor

“INMA has brought the world of innovation together on one stage in the world’s media capital, so take advantage of the moment.” - Yasmin Namini

“Overall, it’s really how does our industry move at a faster rate in this funnel — that’s what INMA is all about.” - Ravi Dhariwal

“Print circulation in the last decade is up in more than half the world,” - Ravi Dhariwal

Media will be available soon. In the meantime, join the conversation by tweeting your thoughts using the hashtag #inmawc.

Ravi Dhariwal is CEO of The Times of India. He is also the current INMA president. He is responsible for The Times of India’s publishing business and also advises shareholders on strategic issues. Previously, he worked for Unilever in the Sales and Marketing Department before joining PepsiCo where he helped to set up the business in India and later became the head of the beverage business.

Yasmin Namini is the Senior Vice President and Chief Consumer Officer of The New York Times. Ms. Namini was named senior vice president, circulation, The New York Times Media Group, in 2006 and to her current position in June 2007. Previously, she was chief customer officer for the New England Media Group since 2005.

Juan Senor is a London-based partner at the Innovation Media Consulting Group and the INMA World Congress moderator. He is the Visiting Fellow at Oxford University focusing on the future of news media and co-editor of Innovations in Newspapers and Innovations in Magazines World Reports as well as Capturing Young Readers.

Links will be available soon. In the meantime, join the conversation by tweeting your thoughts using the hashtag #inmawc.

The world is divided into two media groups, according to INMA president Ravi Dhariwal:

This formula is outdated, Dhariwal said, and media organisations need to find a way to make print and digital work together.

“Print is growing in half of the world and probably declining in the other,” said Dhariwal, CEO of Bennett Coleman & Co. Ltd (The Times of India). “It’s really a tale of two worlds.”

The focus of INMA is aggregating the best practices from peers worldwide and connecting companies with relevant information outside of traditional publishing, he said. The industry, he continued, is moving through a funnel into bridging the gap between print and digital.

“Overall, it’s really how does our industry move at a faster rate in this funnel,” Dhariwal said. “That’s what INMA is all about.”

Yasmin Namini, vice president of INMA, went further in explaining what the theme of the congress means. 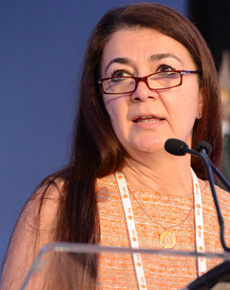 “Monetising the new print+digital ecosystem” is about moving the industry through the multi-media funnel and finding new ways to create revenue to fund quality journalism, she said.

“INMA has brought the world of innovation together on one stage in the world’s media capital,” said Namini, senior vice president/chief consumer officer at The New York Times. “So take advantage of the moment.”

Earl Wilkinson, CEO/executive director of INMA, echoed this theme, but suggested that this movement and transition is at a critical moment and should move faster.

“I would suggest to you that one of the keys to going faster is get out of the do-it-yourself mode,” Wilkinson said.

Wilkinson set the stage for the moderator of the World Congress, Juan Señor, a U.K.-based media expert and visiting fellow at Oxford University. 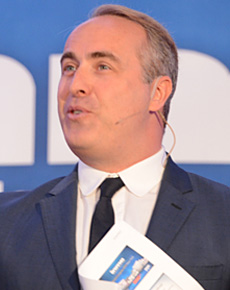 However, Señor warned that print is not on its deathbed and should be an important facet of the news brand.

“Ignore print at your own risk,” Señor said.

Why core audience relationships should be a KPI for media companies