SUMMARY: Mobile wallets and augmented reality are just a glimpse into the mobile future consumers are going to embrace — and so should we.

Second Wave mobile, or monetizing mobile, is a hot topic in today’s media industry as some experts predict mobile online usage surpassing that of desktop computers by 2014. Mark Challinor, director of mobile platforms for Telegraph Media Groups, talked to the World Congress on the future of mobile, and how to best capitalize on the rapidly changing and expanding mobile environment. A variety of speakers took the stage to each present on different mobile topics. Paulo Mira of digital agency PHD Mobi told the room that the future is a world more connected and more populated with mobile devices -- and that the future is now. He focused on the need for interactive and innovative mobile advertising that engages the user. Otto Sjoberg, president and founder of media revolution took the stage to discuss mobile payments. Sjoberg said a future is fast approaching that will see the elimination of real wallets, instead being replaced by mobile phones to pay for services. Stephen Shaw, CMO and founding director of augmented reality company Blippar, explained another part of the future of mobile in the form of augmented reality. Jon Nevitt of web analytics and audience building comapany Quantcast talked about the importance of understanding and identifying target demographics to better advertising across multiple platforms.

“Where the eyeballs go, that’s where the money goes too.” - Mark Challinor

“We need to understand the different behaviors and mindsets of mobile users.” - Mark Challinor

“When it comes to designing for mobile sites, less is more." - Mark Challinor

“The mobile wallet is not just about payments," said Otto Sjoberg. "It’s about services.”

“If you are smart enough, wise enough, relevant enough, you can take advantage of each and every technology in the market but you have to be smart to make money with it.” - Paulo Mira

Apple iPad Mini - We are Apple, you are suckers
An apple commercial parody from the Jimmy Kimmel live show.

Mark Challinor is the director of mobile platforms for Telegraph Media Group. With over 20 years of experience in print and digital media, he is a specialist in "mobile platform" media and the "print + digital" ecology, merging traditional and newer channels while maximizing profits. Challinor is also a panel member for the Committee of Advertising Practice and the incoming international vice president of the International Newsmedia Marketing Association.

Apple iPad Mini - We are Apple, you are suckers (Video)
An apple commercial parody from the Jimmy Kimmel live show.

Mobile devices are changing the digital landscape in an increasingly significant way, according to Mark Challinor, director of mobile platforms for Telegraph Media Group.

“It all has its value,” Challinor said. “We truly are a multi-screen generation.”

Challinor talked about the state of the market in response to the second wave of mobile devices.

Mobile usage is expected to surpass desktop use in 2014, he said. However, one of the consequences is the abundance of information that this creates in the digital environment.

News brands should look for the revenue opportunities this expanded involvement creates.

Challinor offered projections for the future that include a mobile dominance, ubiquitous WiFi, and expansion in multi-screen homes.

“People are waking up to mobile more and more,” Challinor said. “There are a lot more opportunities in mobile advertising.”

The constant updating of mobile devices might be seen as less of a help and more of a distraction, Challinor said. He presented two videos, which parodied the built-in obsolescence of Apple, products to support this idea.

An example of mobile use Challinor brought from the Telegraph was that the company created a special mobile afternoon edition during the London Olympics.

“Video on mobile will be our biggest revenue opportunity in the next few years,” he said on the subject of monetising mobile media for the future.

Paulo Mira, president of PHD Mobi, joined Challinor to talk about how far the mobile industry had advanced in the recent past. Things that didn’t seem possible a few years ago are being actualised today, he said.

“There’s no future. The future is now,” Mira said. “And we have to do our best to take care of it.”

Mira defined the second wave of mobile is going beyond apps and understanding the necessity of creating a mobile site. He emphasized that new companies are producing and investing a lot into capitalising into digital media.

Mira said surprising the user with responsive and creative ad design is what mobile advertisers are looking at currently.

In his second turn at the podium, Mira put the spotlight on methods companies are using to find new revenue models such as 2D and QR codes.

Challinor returned to say that in the future he sees that there will be more utilisation of mobile promotion such as ad background takeovers.

“Where the eyes go,” he said, “that’s where the money goes.”

Challinor said only 33% of total digital ad revenue comes from mobile. He believes this discrepancy stems from a need for education and solutions as opposed to adverse attitudes on the parts of advertisers. 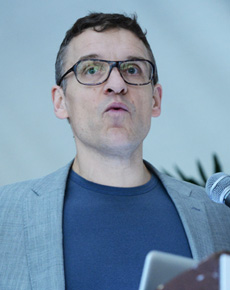 Otto Sjöberg, the director of Media(r)evolution, introduced the concept of M-commerce, which is the switch from e-commerce to a mobile device.

Sjöberg said that he expects the mobile wallet, or “mallet,” concept to experience sizeable growth in the next few years. He projects mobile wallet transactions to go from 100 billion to 617 billion by 2016.

“The mobile wallet is not just about payments,” he said. “It’s about services.”

Another technology that Challinor presented was Augmented Reality, or AR. He introduced Stephen Shaw to expand upon that concept.

Shaw, CMO and founding director of augmented reality company Blippar, explained that, as an industry, media professionals have a hard time imagining how it is to be a reader and whether readers are interested in using augmented reality.

Shaw demonstrated BlippAR which creates digital content on a mobile device without the use of a QR code.

Challinor also introduced Jon Nevitt, director of product marketing at Quantcast, who spoke about bridging the digital gap with traditional solutions. Publishers do this to offer dynamic, fresh, and census-level data to advertisers.

Nevitt mentioned many companies wish to sell their product across different mediums, but this is a problem because they’re dealing with a lack of visibility.

He stated that metrics for mobile content is important on the audience development side of advertising, and that this is one of the solutions to the challenges bridging the digital gap presents.

All of the speakers emphasised Challinor’s point that the gap in mobile revenue must be closed because by 2020, as it is projected that half the world will be accessing the Web primarily from their mobile devices.

Why core audience relationships should be a KPI for media companies