SUMMARY: Presenters from Forbes Media, Financial Times, and Helsingin Sanomat discuss what they are doing to remain top players in the digital media realm.

The transition toward a print+digital model is a necessity for the future of news media, which subsequently drives the need for news industries to change their business models. According to Lewis D’Vorkin, chief product officer of Forbes Media, the key to news companies’ reinvention for the digital era is relentless product growth. D’Vorkin said Forbes is looking to the future by creating a new newsroom business model that places importance on becoming a publishing platform. Rob Grimshaw, managing director of FT.com, Financial Times, further advocates the importance of moving from a traditional business model centered on print distribution to one that will better serve the growing digital community and produce revenue. The goal for Petteri Putkiranta, commercial director of Helsingin Sanomat, is to increase subscribers and reach through a business strategy that will redefine print and depend on user behavior.

“We are no longer only a website, we are a publishing platform. We are journalists, we are academics, we have authors, we have topic experts, we have business leaders, we have entrepreneurs and many other knowledgeable people who publish on our platform.” - Lewis D'Vorkin

“The newspaper business, the publishing business, is a very static business historically for a very long, long time. For a hundred years plus, the process of our business did not really change.” - Rob Grimshaw

“We’ve created a world where although we might struggle in an advertising market — which is much more challenging than it is in print — we found a way to create a profit in another part of the market around subscriptions. And we’ve done it by taking, in part taking a share of the pie which was usually there for third parties.” - Rob Grimshaw

“The market is soft, it has been soft, but at the moment it’s nice to be in the situation where you have news to tell.” - Petteri Putkiranta

The Commercial Director of Helsingin Sanomat, Petteri Putkiranta, enlightens the audience during his speech on disrupting the disruptors.

Lewis D’Vorkin was senior vice president of programming at AOL, where he was responsible for News, Sports and Network Programming and played an instrumental role in the launch of TMZ.com. He was also Executive Editor at Forbes magazine, where he spearheaded the magazine's redesign, managed the annual Forbes 400 Richest Americans list and created the Celebrity 100 List. He was Page One Editor of The Wall Street Journal, a Senior Editor at Newsweek and an editor at The New York Times.

Rob Grimshaw is the managing director of FT.com and is the Financial Times board member responsible for the commercial development of the FT’s B2C digital business & product portfolio.

Leading news publishers are taking steps to enhance digital experiences for consumers. Today, presenters representing Forbes Media, Financial Times and Helsingin Sanomat provided insight into what their companies are doing to remain top players in the digital media realm, explaining digital disruption, how it is evolving, and how it affects their companies.

D’Vorkin showed a diagram with a new workflow for newsrooms that eliminates editors and gives readers content they want to consume and the power to create their own.

“We built the tools for them to publish,” he said. “They publish text, they can insert their own photos, they can make their own photo galleries, video — they do it all. They write, they produce the programme, they promote, and best of all, they hit the publishing button.”

With the new model, the company must change production, which results in a change in the way that consumers pay for the content and how news companies pay to produce it.

D’Vorkin said national, brand name newspapers used to run at a cost of about US$30 per minute. This amount is considerably more than the US$2 per minute spent by digital companies per minute today.

The desire to become a top competitor in the digital market is what keeps Forbes working to improve and remain an “authentic voice” to the social world.

“We are a relentless product machine,” D’Vorkin said. “We have something new we’re doing once a week.”

Digital success comes from not being tied down to tradition while at the same time staying true to the heritage of a brand, according to Rob Grimshaw, managing director the Financial Times.

Branding is important, but many other aspects of the business need to change.

Business models need to change. The traditional print model is about distribution — a model that does not work in the digital realm, he added: “In a digital world, distribution is worth almost nothing.”

These changes are a part of a process that Grimshaw describes as necessary to become a disruptor in the media market. Companies should not let go of their brand, he said, but to make major changes within the business. Business models, distribution, and culture need to change.

“The FT of today looks very different from the FT from 10 years ago,” he said.

Companies must base digital business off of something else, Grimshaw said.

“We’ve created a world where although we might struggle in an advertising market — which is much more challenging than it is in print — we found a way to create a profit in another part of the market around subscriptions. And we’ve done it by taking, in part taking a share of the pie which was usually there for third parties.”

He suggested cutting straight to the customer.

In a personal example, Grimshaw explained how Apple attempted to force the Financial Times to sell its subscriptions through the Apple app store — while taking 30% of all the profits.

The Financial Times already had a loyal subscriber base, and so instead used the new technology of HTML 5 to bypass the middle-men and allow customers to subscribe straight through them.

He emphasised that companies need to have an open mind and be willing to roll the dice. This open-minded nature includes being willing to borrow already well established ideas.

“Some of the ideas you need to change your business in the digital space are already out there,” he said.

Although the ideas may be reused, the notion of rebuilding companies remains: “We’re going to have to change our outlook on the world to change our organisations.” he said.

As the market and consumption of news evolves, so has Helsingin Sanomat, said Petteri Putkiranta, commercial director of the company. 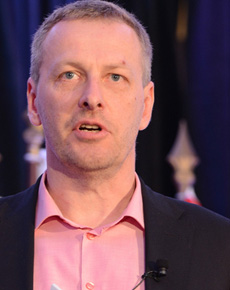 The print subscription holds a majority of readers for the newspaper, but it has dropped slightly since 2012, Putkiranta said.

As focus has shifted to digital media, Putkiranta said that a paywall and a limited number of free articles kept many consumers from purchasing subscriptions.

The major change came with the introduction of the tablet. Consumers started paying more attention to online content: “The engagement level of the users on the iPad could be on the same level as the print.”

The company focused on explaining the value of the online content to customers, he said, which will help them reach their goal of increasing subscribers.

Because of the digitization, there is more content being produced and gathered by readers, which has pros and cons for Putkiranta and the company.

“The market is soft, it has been soft,” he said. “But at the moment it’s nice to be in the situation where you have news to tell.”

PREV Digital disruption: unleashing the next wave of innovation NEXT Arianna Huffington’s thoughts on three megatrends, sleep, and iPhone addiction