SUMMARY: The lines between content creation and consumption continue to blur, and publishing companies need to be innovative to meet customers’ self-centered needs when dealing with issues like ad blocking and the comments section.

You don’t have to work in media to know that the publishing industry is in a state of perpetual change, and, as time goes by, the pace of that change is accelerating.

Diversification of distribution models is on the rise, the digital advertising landscape is in disarray, and the user base has never been more fragmented.

All that publishers held as gospel in their business holy books is being turned upside down. Media moguls that once ruled news are now being schooled and ruled by the masses who are the guardians of digital.

The saving grace in all this chaos is that hunger for news has never been greater, and the opportunities for publishers are huge. But when it comes to the state of most publishers’ Web sites, there is good news, there’s bad news, and then there’s – let’s face it – ugly news.

In August 2015, digital newspaper audiences in the United State hit an all-time high, peaking at 179.3 million unique adult visitors – up 10% from the same time the year before.

In 2008, the average bounce rate for news and media sites was ~55%. Seven years later, it is trending in the wrong direction.

There is no question about it: Engagement on news sites is getting worse instead of better. Some of the obvious reasons include:

Fifteen years ago humans had an attention span of 12 seconds. Today we’re sitting at 8.25 seconds – almost a second less than that of a goldfish!

So, regardless of why bounce rates are so high, the fact is that reader attention is a precious commodity that publishers cannot afford to waste.

According to a recent study by PageFair and Adobe, there are close to 200 million people using ad blocking software today. In the U.S., ad blocking grew by 48% in just 12 months; globally, it’s growing at a rate of 41% year-on-year. It’s estimated to cost the industry US$10.7 billion this year in the United States, almost doubling to US$20.3 billion in 2016 (US$41.4 billion globally)!

I’m not sure ugly even needs further debate because the pervasive use of ad blockers by news readers already speaks for itself. But what isn’t so comprehensible is how the rampant growth of ad blocking is being addressed by the industry.

Some publishers have had the audacity to try and take ad blocking vendors to court; thankfully they are losing.

Others are declaring war on readers who use ad blockers, forcing them to put up with their ad-infested Web sites, pay up if they don’t, or take a hike.

It truly does boggle the mind that the leaders of our industry still think they own the Web and consumers should follow their rules. Hmm … I guess they didn’t get the memo about “the golden rule.”

In today’s hyper-connected world, users rule, not publishers. And those rulers are making it perfectly clear that, “It’s not about you anymore, Mr. Publisher and Ms. Advertiser …

It’s all about me!

Starting at the bottom, when one need is satisfied in the hierarchy a person will then seek to fulfil the next one up in the pyramid, and so on until they satisfy the ultimate need for self-actualisation.

Without empirical evidence, Maslow’s theory of human motivation didn’t receive full blessings within the field psychology, but it has had significant influence in the areas of child development, education, and the workplace (e.g. human resource management and customer experience).

When I thought about the application of it from a customer experience perspective, it wasn’t much of a stretch for me to construct a Need Hierarchy for news readers.

Doing all the right things may seem like a lot to ask of one newspaper, but publishers don’t have to tackle the challenge alone. There are lots of technology and distribution partners that can help publishers fulfill readers’ needs at this most fundamental level.

News publishers have yet to eliminate all of these friction points, which is why so many of them are struggling to grow and monetise their digital audiences.

If publishers treated their Web sites and advertising as they do their editorial content, the industry would not be in this predicament. By ignoring the basic law of economics (supply and demand), advertising has become commoditised due to an over-supply of platforms and ad space. No wonder CPMs are so low.

Putting quality before quantity in advertising will mean less intrusive ads and a more inviting user experience, which will equate to lower bounce rates and higher CPMs for publishers.

There’s an interesting trend happening in media these days. More and more publishers, especially in the magazine sector, are recognising the power of an engaged community and are diversifying their businesses to include events, exclusive offers, blogging networks, travels clubs, and more.

That’s all great. But if social media has taught us anything, it’s that people also want to connect with each other online around news and common interests.

Sadly, instead of capitalising on this massive opportunity to grow engagement with readers who want to connect with journalists, editors, and other readers, more and more myopic media execs are disengaging from readers, forcing them to take their comments (and the ad dollars they generate) elsewhere.

Roy Greenslade, a professor of journalism at City University in London and writer for The Guardian, questions this disturbing trend: “If the debates stimulated by newspapers are taken off site, then the paper’s online numbers fall and, by extension, its advertising or sponsorship potential falls too.”

Mathew Ingram, a respected writer on the evolution of media and the social Web, has become a voice for the social masses saying that pushing users away to social media to comment is like throwing a “potentially very valuable baby out with the bathwater.” He also has an even more interesting theory, other than the typical trolling excuse, on why publishers are muzzling their readers:

“For me at least, too much of the complaining about comment sections and the decision to do away with them seems to be driven not by the bad behaviour in them, but by a lack of interest on the part of some journalists and media outlets in engaging with readers at all — and the hope that if there are no comments, maybe there won’t be any way to see the mistakes or call them to account.”

Publishers, wake up! It’s not a one-way conversation anymore. Your Web sites and apps need to become open, personalised playing fields where my opinions matter.

Studies done by Pew Research Centre in 2010 showed that people’s relationships to news is becoming more portable, personalised, and participatory, with 37% of Internet users saying they have contributed to the creation of news. (If the study were done today, I expect that number would be even higher.)

Why is that? Why do people want to participate in the news?

According to a more recent study by The New York Times, there are five key drivers to sharing and contributing to news: altruism, empathy, connectedness, evangelism, and self-definition.

And although I thought the NYT October 2015 strategy memo, Our Path Forward, demonstrated a misunderstanding about today’s mobile audience and its needs, a lack of vision in terms of borderless content reach (seriously, a target of only two million digital subscribers in five years?), and a blind faith in the omnipotence of The Times as a brand, I applaud the publisher’s appreciation of readers’ comments on their digital properties where NYT can reap the rewards of an engaged community of participatory readers.

But how is self-definition related to self-esteem and recognition from others?

Neel Burton, M.D., a psychiatrist and author of a dozen books, defines self-esteem as “our cognitive and, above all, emotional appraisal of our own worth – a matrix through which we think, feel, and act, and reflects and determines our relation to ourselves, to others, and to the world.”

When I read this, I was reminded of my interview earlier this year with Duncan Stewart, the director of technology, media, and telecommunications research for Deloitte Canada. Stewart shared that young people carry printed books because they make them feel smart:

“When I am carrying a printed book, I convey a certain image of myself to others; people know what I’m reading, what my tastes are, and the kind of person I am.”

In NYT best-selling author Maria Konnikova’s article, The Psychology of Online Comments, she talks about the debate around denying people the right to comment on articles:

“Removing comments affects the reading experience itself: it may take away the motivation to engage with a topic more deeply, and to share it with a wider group of readers. In a phenomenon known as shared reality, our experience of something is affected by whether or not we will share it socially.

“Take away comments entirely, and you take away some of that shared reality, which is why we often want to share or comment in the first place. We want to believe that others will read and react to our ideas.”

Self-esteem and self-definition go hand-in-hand, because today it’s all about me!

It’s not often that I recommend other publishers follow in the footsteps of NYT (for reasons stated earlier), but in this case, I’m making an exception. Open your arms and articles to your readers with an intelligent commenting system. Then watch your bounce rate drop and ad revenues rise as readers’ ability to define themselves to others elevates their self-esteem.

There have been a number of definitions bantered around for the term self-actualisation, but they all basically come down to “the full realisation of one’s potential, and of one’s ‘true self’.” The quest for spiritual enlightenment, pursuit of knowledge, expressing one’s creativity, and the desire to give back to society are examples of self-actualisation.

So how does this relate to news media companies? It’s a huge opportunity!

We’re already seeing the lines between content creation and consumption blur, as more and more readers are contributing to news. But in today’s fragmented world, consumers don’t have the opportunities to reach their full contributing potential through news sites and social networks because their contributions/comments are: 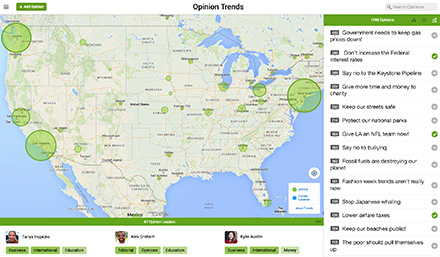 Imagine if news media Web sites offered readers an opportunity to share opinions that could take on a life of their own and never perish.

Imagine if publishers could facilitate the discovery of like-minded people around topics of interest and let readers build teams around shared opinions.

Imagine if publications could be transformed into a social network for news that gives readers opportunities to grow knowledge, relationships, and status within the community – allowing them to achieve their full potential in terms of contributing to society and influencing others.

Nikolay Malyarov is executive vice president, chief content officer, and general counsel of PressReader in Richmond, British Columbia, Canada. He can be reached at nik@pressreader.com or @malyarov. This post is part of the Digital Insider blog at INMA.org.

PREV Is the future of coupons mobile? NEXT Content in the right personalised context is king